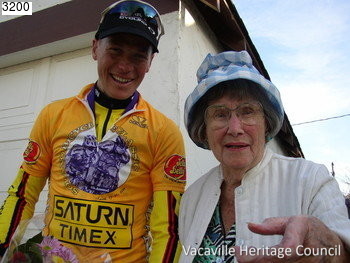 Gwen Swope and Cyclist Chris Horner at the Solano Bicyle Classic Event In Downtown Fairfield.  Mrs Swope was a lifelong resident of Fairfield.  She allowed the race officials access to her electical outlets during the race which ran down Kentucky Street near her home. Her father was Bill Glusen, the first fire chief in Fairfield.