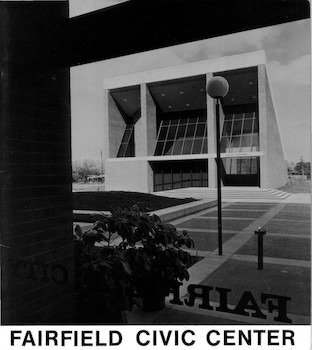 The first step toward a Fairfield Civic Center began on November 24, 1953, when the City CouncIl voted to proceed with purchase from the Federal Government of a thirty-three acre site just north of the City's Central Business District. This site was well known as Wateman Park and had been a World War II temporary housing project of 315 unots with a central recreation center and cafeteria. At the time of purchase the City Council intended that the site become Fairfield's Civic Center. The City Hall building is the largest of the five building complex. It contains 33,000 square feet and has space for extensive future expansion. It is a four-story structure which overlooks a central, three-acre man-made lake. Office locations were planned so that those most often used by the public would be the most accessIble. ARCHITECTS: ROBERT HAWLEY AND ASSOCIATES, San Francisco. LANDSCAPE ARCHITECTS: RIBERA AND SUE. GENERAL CONTRACTOR: STOLTE INC. SITE WORK CONTRACTOR: SOLANO CONCRETE.