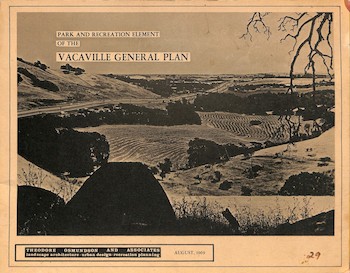 Park and Recreation Element of the 1969 City of Vacaville General Plan. Prepared by Theodore Osmundson and Associates and presented to the City Council in August 1969. The Recreation Element consists of two studies which have been combined into a comprehensive overview of the Vacaville urban and regional environment. The following school parks are included in this report: Fairmont, Elm, Ulatis, Markham, Jepson, Monte Vista, Hemlock, and Alamo. Vacaville City Park, Ulatis Creek Park, and Civic Center Park are mentioned as well.