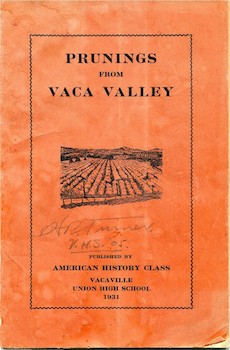 This pamphlet is published by the members of the American History Class of 1930-1931 of Vacaville Union High School as an effort to preserve a few of the facts and recollections of our pioneers, in order that they may not be entirely lost or forgotten. The class is deeply indebted to the following for their kind assistance in making this pamphlet possible: Mr. Ned Wolfskill, Mrs. Maria Dolores Lyon, Mr. James McCrory, Sr., Mrs. E. C. Crystal, Dr. W. L. Jepson, Mrs. Ross Ryan, Mr. Neat Tate, Mrs. William B. Dykes, Mr. Meredith Miller, the Vacaville Reporter, Mr. George Samuels, and many others.